Rukmini Devi Temple or Rukshmani Devi Temple is located very close to Dwarka city towards northern direction, on the road leading towards Bet Dwarka, on the banks of Bhagirathi river. The temple was constructed in the 12th century with attractive carvings on the dome and pillars. You can find a beautiful marble structure of Chaturbhuja  Devi Rukmini. The four hands hold padma, gada, sankha and chakra that is symbolic of her reincarnation as Ma Lakshmi. 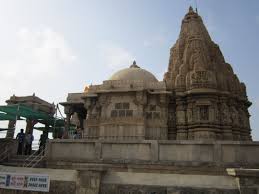 Rukmini Devi’s younger sister was Rukmi. Their father was King Bhishmaka of Vidharba. Uncle Kansa was the friend of Krishna and did not want his sister to fall in love with Krishna. Rukmini after offering prayers in the temple saw Krishna and fled with him in his chariot. Krishna defeated Rukmi and decided to kill him. Rukmini urged to forgive him and Krishna after shaving his head allowed him to escape.

Among the 16108 wives that Krishna had, he made Rukmini the chief queen. They invited Sage Durvasa to celebrate their marriage. He accepted their invitation and decided to visit only if the couple pulled his chariot rather than the horses and bulls. Rukmini on the way felt thirsty and asked for water. To quench her thirst, Krishna hit the ground and the Bhagirathi River appeared that escaped eyes of Durvasa. Rukmini drank water. Durvasa seeing this got very angry and felt insulted, considering the fact that he was not fed first being the guest. He cursed that Dwarka will lack sweet water and the couple won’t stay together for more than 12 years.

Rukmini Devi Temple was built away from Dwarka, where Krishna gave water to her and where they were separated as a result of curse from Durvasa. Devotees widely believe that the pilgrimage is not complete if a devotee does not offer prayers at the Rukmini temple, even if they have worshipped Lord Krishna in the Dwarkadheesh temple.

The word Talav means Pond. It is situated 21km away from Dwarka and 5 km away from the Nageshwar Jyotirlinga temple. According to the popular beliefs Krishna killed Bhaumasur and released 16000 princesses from the palace. All the gopis fell in love and wanted to marry each other. The princesses were called gopis and thus the name given was Gopi Talav. 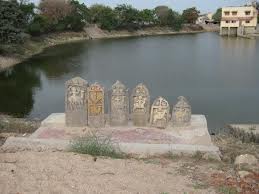 The Legend about Gopi Talav

The other story is related with Arjun. He considered himself the best warrior in the whole world after he fought the Battle in Mahabharata. Lord Krishna to show him the actual position, asked Arjun to escort the queens to Bet Dwarka. Near the pond he was attacked by people in Kaba and Arjun was defeated. The queens were extremely shocked and they died in the pond. This gave the name Gopi Talav. A famous phrase in this connection is, “Kabe Arjun luntiyo,vohi dhanush vohi ban”. The talav is a small pond and the sandal looks like yellow sand. This is popularly known as Gopi Chandan. The devotees consider this to be extremely good for curing skin disease.