Dwarka is one of the most prominent pilgrimage centers in India. The legends are linked with the life of Lord Krishna. Dwarka in the puranic days was popularly known as Dwaravati or Kushasthali. The place enjoyed pride of the most vital spots on Saurashtra coast. As per the saying goes, Lord Krishna after slaying Kansa left for Mathura and visited the Yadav community in the Saurashtra coast. Here he founded a town which he named Swarnadwarika. Lord Krishna's successor and his great grandson, Vajranabh is known to have built the temple of Dwarakanath, which is also known as Trilok Sundar. Hindus share a belief that the temple was built in a single night under the direction of Vajranabh with the help of a supernatural agency. 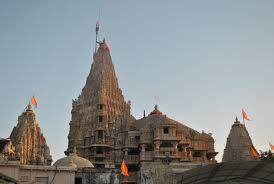 Dwarka is well known for the Dwarkadhish temple that has been constructed 1400 years before. The temple houses image of Lord Krishna and draws pilgrims from different parts of India and abroad. Birth of lord Krishna is celebrated here every year in the month of Shravan amidst great joy.
Sharrada Peetha: Sharrada Peetha established by Jagat guru Sankaracharya is one of the Mathas. The Matha runs an arts college, an educational society, a Sanskrit academy that guides scholars in Indology and Sanskrit.
Bet Dwarka: Bet Dwarka that is situated at a distance of 5 km from Okha Junction is also known as Bet Shankhoddar. This place is said to be the place where Lord Krishna resided with his family. The place in also known for Vishnu’s attack on the demon Shankhasura. Visitors from different parts of the world visit the site to know more about its historical significance.

Celebrations and Beliefs in Dwarka

Festivities begin with fasting on Saptami that is followed by the entire night vigil on commemorating birth of Krishna and removal of his father in a foster home. The idol of baby Krishna is bathed and then placed in the cradle where it is worshiped.
After the prayers in the morning and worship, devotes break their fast and offer food to Krishna. The custom of "Dahi-Handi" is celebrated in the fore-noon hours. There is a custom of breaking earthen pots containing buttermilk that is tied higher up. People join hands to create a human pyramid to reach the pot. Those near the pyramid keep throwing water on the group forming the pyramid.
Breaking of the handis is followed with mid-day feast. Sweats made of dairy products and milk is prepared in this auspicious occasion.
Being the legendary dwelling place of Lord Krishna, the city dazzles to the celebration of Janmashtami every year. The city prepares to celebrate the auspicious birthday of Lord Krishna that is joined by millions of tourists from different corners of the globe.
The local administration tightens its security to avoid any untoward situations like stampede in and around the temple premises.

Being a part of Gujarat, the city enjoys lavish Gujarati dishes. The restaurants prominently serve the best Guajarati cuisine to the tourists visiting every year. The Dwarkadhesh temple offers food in forms of prasad from krishna. You can enjoy eatables made of milk and desserts such as dahi lassi, flavored milk, rich butter, peda and so on. Being a holy city, it is a bit difficult to find roadside dhabas serving alcohol.
The Dwarkadheesh Mandir is decorated with lights and huge generators installed to ensure uninterrupted power supply. The awe inspiring look of the temple is maintained all through the janmotsav.

Art and Craft of Dwarka

Artists in Dwarka put in their best efforts to design different forms of crafts. The art work is a reflection of the craftsmanship and attitude of the people towards life. Every concept of art is different from the other.
There is a strong belief that individuality of the craftsmen is linked with the religion that has helped improving their skills to a considerable extent. The textile, brass, bronze, frescoes, music, painting manifest their emotions and sense of creativity. Artists emerge religion, nature and creativity in designing clay wood, brass, bronze, and stone.
Calligraphy shows a unique combination of creativity and science. This form of art is passed from the father to the son. The colors never fade and remain fresh for years together. Calligraphy is used for wall decorations and the paintings look fresh even after several years.

Being a religious and historical site one can find plenty of devoted followers of lord Krishna. Every year during the celebrations of Janmashtami, hundreds of devotees from different parts of the world participate in the celebrations.